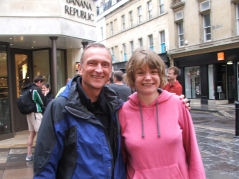 Dave and I volunteered to organize a few teams for the Cotswold Way Relay (CWR). The CWR comprises of ten legs to cover the entire 102 mile Cotswold Way. Each Leg ranges in length from 7-12 miles whilst the common denominator was that they were all hilly! The Relay starts at 0700hrs in Chipping Campden and finishes 12hrs later in Bath.

Forty Almost Athletes decided to take up the challenge, some more readily than others who needed a bit of persuading, some had completed Leg(s) before and some novices, to make up four mixed teams – Almost Amazing, Almost Brilliant, Almost Credible and Almost Desirable (Dave’s choices not mine).

As the CWR is run under Fell Running Regulations, there are no marshals, handy mile markers, route signs or goody bags. All runners have to navigate themselves through their Leg; sometimes the Cotswold Way markers are good and other times absent. Dave did a stirling job arranging numerous recee runs of different Legs.

Almost Athletes were asked to run a water station on Leg 3, Fiona Judson organized a very efficient operation complete with feather boas and flags, cowboy hats, banners, water and jelly babies. Abi, Sam, Paul, Thom and myself pitched into help. James Wilkinson was the first Almost to the water station - he looked slightly embarrassed at the whooping and hollering he subsequently received, Helen and Lorraine were next for a jelly baby or two, water and a chat, followed by Debbie.

Then a swift drive over to the start of my Leg, 5, from Cranham to Ebley Mill in Stroud. Peter Haken, Abdul Smith and Mark Willicott were my “Leg Mates”. This Leg starts on the uphill, then there is a long descent down through Painswick followed by a long uphill section through Pitchcombe. The Leg undulates along the escarpment through to Standish Woods and then downhill into Ebley and along the canal for the final half a mile. Abdul got momentarily misplaced and I got stuck in a field with a bull. Thank you to Mr Wessex-water-runner for distracting the Bull so I could escape!

The only “brief” Dave and I had been that Rich Gilbert needed to do Leg 10, so he could complete his ten year project to run each of the ten legs and be crowned “King of the Cotswolds”. Rich’s “Leg Mates” were Nick Spice, Paul Thomas and Barry Walker. Mark, Hannah and Ollie Stephens, Eddie Munroe, Dave and Sam McGrath, Thom and I waited in Bath. After a torrential downpour Nick was first in, followed by Rich, Paul and then Barry. Nick asked if anyone wanted a coffee, Sam asked for a “nice latte”, she was a tad unsure when Nick presented her an “iced latte”, priceless! 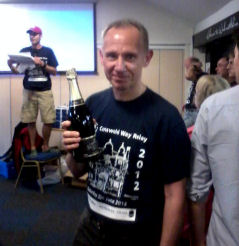 Thank you to everyone who ran (please encourage people for next year), to all those who supported giving their time and energy to help or cheer. A big thank you to Dave McGrath, a demon organizer and networker and finally to the Club who also supported throughout this event. See you all next year, Becky x