Thursday 9th December
Morning run Meet-up Point for coffee at 10:15am : The Exmouth

Please continue to take personal responsibility to look after the health of your fellow runners and stay away from club sessions if you have COVID symptoms. In addition, please consider the current health of your close contacts when deciding whether you should attend any sessions.

Virginia Pawlyn started running in 2006 in order to train for the 5K Race for Life. She had never been sporty at school but kept fit in retirement by doing aerobics and yoga. This was the first race she had completed since the egg and spoon race at school! 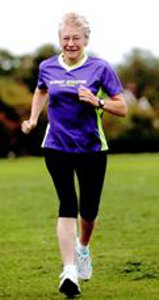 Virginia Pawlyn started running in 2006 in order to train for the 5K Race for Life. She had never been sporty at school but kept fit in retirement by doing aerobics and yoga. This was the first race she had completed since the egg and spoon race at school!

In 2007 she joined Evesham Vale Running Club and entered her first 10K at Crowle which took her 64 minutes. Since then she has completed 25 races including 3 half marathons.

Coinciding with a move to Cheltenham in 2008 she joined Almost Athletes. Discussions in the pub after club runs turned to marathons and she wondered if she could tackle the challenge. An approaching 70th birthday in 2010 was the clinching factor for her.

Virginia chose the Jersey Marathon for her debut because it was flat, she had previously lived there and because her family originally came from the island.

Hiring a personal trainer was high on the agenda so she wrote to several with this helpful hint: "I appreciate someone who is a firm task master.". Dan Fivey, who was subsequently hired, prescribed Virginia a set of home work-outs and accompanied her on runs which included multiple hill reps. Over a 12 week period she ran a total of 411 miles, the longest run being 21 miles.

On the day of the marathon in October, Virginia decided to run the first half of the race at 10 minute miling and arrived half way in 2 hours 10 minutes. Anticipating that her finishing time would be around 4 hours 45 minutes, she had previously arranged for her family to meet her at the finish based on those timings, but had to call them at 25 miles to ask them to leave the bar early to meet her some 20 minutes earlier than expected!

Virginia crossed the line in 4 hours, 26 minutes and 29 seconds, 'completely mystified' at how she had achieved such a time. She is indebted to her friends at her running clubs and to her trainer for their support and plans to run the London Marathon in 2012, having qualified in the 'good for age' category. Well done Virginia!